A New Leprechaun Slot with a Twist 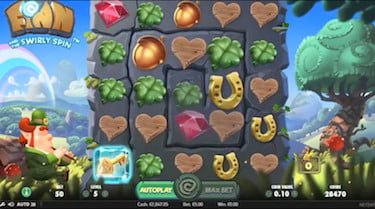 Online casino software companies are getting ready for the winter season by releasing tons of new slot games this month, covering a very wide range of topics. Each game looks great in its own way, but some have us more excited than others due to their unique gameplay or amount of bonus features. Don’t worry – the sheer volume of games released this week guarantees that there’s going to be a little something for everyone this autumn no matter what genre you’re into.

The first game released this week is one of Betty Dee’s most hated genres, “Leprechauns & Gold”, however this time she might enjoy it since it’s arrived with a new twist – literally. The unique title from NetEnt is called Finn and the Swirly Spin and it features 5 reels and 5 rows, but these reels certainly don’t spin in a traditional way. The game symbols arrive on the board in a swirling motion, going from the outside positions and then snaking on to the middle ones. It’s quite a daring move for the online gambling world and it will be interesting to see how players respond to the new spinning method.

The reels don’t award wins in a traditional way by the symbols making up winning paylines, and instead it awards you for “win clusters”, which as you can probably guess are clusters of winning symbols. In an exciting “twist”, once the win has been added to your balance the cluster will disappear and the symbols above them will fall down in their places to hopefully create another winning cluster. This type of reel feature is usually referred to as “collapsing reels” or “rolling reels”. 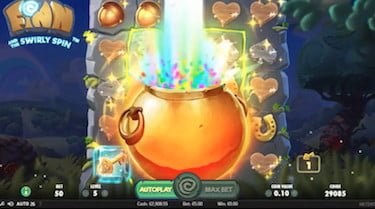 Finn and the Swirly Spin will also attract more than the curious players looking to try something new because there are tons of crazy feel features on offer, as well. There’s an “Irish Luck” feature which randomly creates a winning row of symbols on the board, a “Magic Transform” feature which will morph lower-paying symbols into higher-paying ones, and a “Starfall Wilds” feature that has the game randomly adding 2 to 5 Wild symbols across the reels. That certainly is a lot of action for a peaceful Irish meadow.

When you add these up with the game’s four unique free spins modes and cutting-edge graphics, perhaps we’ll have to agree that this isn’t one of the usual, boring, stereotypical Leprechaun games that we often encounter. However, only time will tell if the “swirl spin” will catch on with the masses – good luck, Finn!

For those interested in seeing this game for themselves, swirl your way on over to Spinland to try this corker out today!