Microgaming Goes Back to the Desert with Magic of Sahara Slots 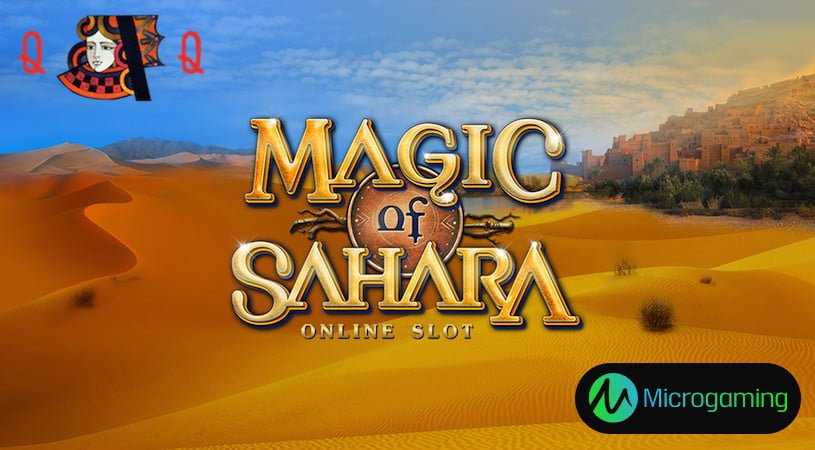 Just when you thought it would be absolutely, totally, utterly impossible for a software company to release another new slot game based on desert treasure and sandy adventures, Microgaming has stepped up to the plate and said, “We gotta another one for ya!” Industry experts are unsure of the current number of Arabian gambling machines in the world, but many usually throw around numbers in the hundreds of thousands.

All (lame) jokes aside, many of you will certainly want to discover the arcane secrets embedded in Magic of Sahara Slots and take a little trip on a magic carpet to this exotic destination that’s free of both vegetation and complication. Most of the traditional imagery that you’ll be expecting to find was included and they even added the stereotypical sitar soundtrack as well for good measure.

This creation is actually a little different than most titles out there because it allows you to trigger free spins in two different ways, allowing for twice as many opportunities to freeroll. There is of course the traditional method of 3 or more Scatters in a result, or you can collect 25 medallions from the desert trader who appears on the reels from time to time to give you strange gifts. Gratis games are extra special in this machine since they pay you double the win amounts for every triggered payline during the feature.

In addition, Microgaming has added in their awesome Superstacked Wilds that can fall on any reel, which will of course lead to a nice cash windfall every time they grace you with their presence. Don’t worry about getting swept up in confusion either because this machine only has 9 paylines, which is one of the smallest amounts you can find out there today.

Magic of Sahara brings the wonder of the desert sands to life, boasted James Buchanan, Director of Global Operations at Microgaming, as he addressed the assembled crowd in full Arabian garb complete with an electric blue turban and bizarre gold medallion.

He then took a large gulp of Qasab before finishing his statement with, All41 Studios have crafted a truly immersive world, with the game’s excellent soundtrack and detailed artwork, which dynamically transitions between day and night cycles, creating a spellbinding atmosphere. Then in a shocking turn of events, the bewildered camel that Buchanan had rode in on reportedly bleated loudly and relieved itself on the stage, which was immediately followed by a collective gasp from the audience and then a smattering of polite applause. Well, it certainly sounds like both man and beast alike are excited for this one!

There are many different options open to those who would like to try out Magic of Sahara Slots for themselves, depending on what you’re looking for and where you live in the world. If you like to play online slots for real money you can choose to visit one of our recommended partners who have licensed the title from Microgaming and grab yourself a nice deposit bonus in the process.

Anyone wanting to try it out for free can enjoy the demo version below: simply click on the spin button in the bottom centre of the user controls and you can spin right on this page and play for as long as you like. If you run out of credits just refresh the page and they’ll reset for you. Enjoy!