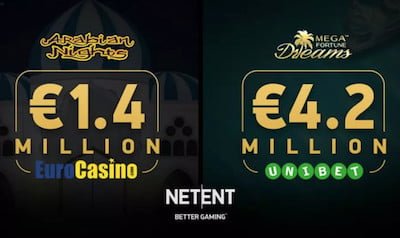 We’re almost halfway through the summer of 2018 so let’s see what’s happened to a few lucky players since the temperatures (and slots) got red hot. It’s no secret that NetEnt has tons of great jackpot games but over the last few weeks they’ve been pumping out a suspicious amount of big cash prizes. After looking at the stats, the phrase that immediately comes to mind is, “When it rains, it pours!”

It all started back on June 12th when Mega Fortune Dreams coughed up a massive pot of €4.25 million…from a tiny €1 wager, no less. The lucky punter was playing slots at Unibet Casino when their life was changed forever after they successfully navigated the mini game that they triggered in the bonus round.

Then a week later on June 17th over at Euro Casino someone was spinning on Arabian Nights, (yet again on €1 wagers), and won a “much smaller” jackpot prize of €1.4 million, which will probably still be enough loot to enable them to quit their day job. At the time NetEnt Chief Product Officer, Henrick Fagerlund stated, “We are proud to give players the chance to change their lives and enjoy such large payouts on our games, all from just one spin. We are sure there will be many more chances for big wins over the summer as we continue to offer games with sizeable jackpots and bonuses to our customers.”

Well Henrick turned out to be 100% correct and two weeks later someone in Finland cashed in on a meaty €2.75 million pot courtesy of Hall of Gods at Finnish-friendly operator paf.com. This time the booty was triggered by the NetEnt Mega Million network jackpot system that spreads over numerous games and casinos.

Mr. Fagerlund immediately took the opportunity to brag about his prediction exclaiming, “We have another example here of how NetEnt’s games can change people’s lives, and the Mega Million campaign will give us even more chances to do just that. We have had three seven-figure jackpot wins this month alone and I am confident we will see more before the end of the year.” In fairness to him, these three wins brought the total number of millionaires NetEnt has created this year to eight.

Anyone looking to take a swing at a life-changing prize will want to check out the progressive slots at MyBookie.ag and take advantage of their current welcome bonus – the bigger the bankroll, the more spins you can take. Good luck!