NetEnt Releases Mercy of the Gods Slots: An Adventure-Themed Game Set in Egypt 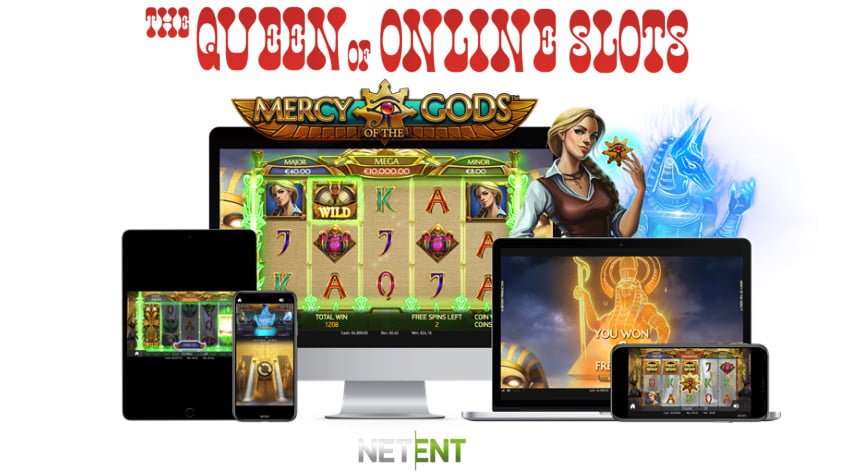 Loyal readers of The Queen of Online Slots will know that adventure-themed games have become all the rage, especially among German players – they just can’t help but be attracted to the constant pursuit of gold and treasure. Now NetEnt has released another machine that is set in Egypt and focuses on ancient gods that are both vengeful and profitable.

The new title is Mercy of the Gods Slots and it’s one of many creations that have been released over the last few years that centres around the goddess of life and prosperity, Isis. As you play you’ll experience her generosity as she dishes out cash prizes through Scatters and Double Wilds, while hitting the Eye of Ra will trigger a freeroll that unfolds on top of a majestic pyramid. In addition to all of this there’s also the ability to visit the lair of Anubis and snatch the “Gift of Wealth Jackpot” out from under his canine nose.

The machine itself was well-designed and is stuffed with ancient Egyptian symbols and is playable on devices of any kind, including iPhones and Androids. It’s quite the traditional-looking affair since it’s a 3 row, 5 reel, 20 payline video slot that never overwhelms you with too many bells or whistles.

Built on top performing Divine Fortune game mechanics, our casino partners can expect a strong performance from our latest release, declared Bryan Upton, NetEnt Director of Games, while wearing a full treasure hunter outfit complete with a high-crowned, wide-brimmed sable fedora and menacing 450 series bullwhip attached to his belt. Mercy of the Gods is a top-quality proven performer and I’m looking forward to what our players think about it across our network, he offered before cracking the whip loudly on the floor in front of a group of delighted industry reporters.

Anyone wanting to play Mercy of the Gods for themselves can swing on over and sign up at Trada Casino to experience the adventure for themselves. If you’d like to have a preliminary glimpse, check out the video below – just make sure to have the volume up so you can enjoy the stern gravitas of the NetEnt announcer who walks you through the features. Enjoy!