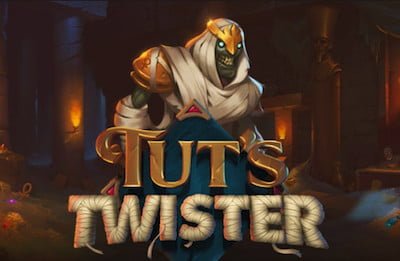 As sure as the mosquitos keep attacking you while you’re sitting on the deck of your cottage, the new slot games keep getting released by developers. Although these titles are brand-spanking-new, they’re based on traditional themes that we’ve seen for years, but of course they’ve been updated with superior graphics and better features. These releases are sure to please traditional players who like to stick with what they’re already familiar with, and refuse to venture too far out into the Great Unknown.

First we have a machine from game developer Yggdrasil that will take us back to the familiar setting of Egypt to spin amid the swirling sands of the desert. The graphics in Tut’s Twister are absolutely amazing thanks to Tut himself lurking beside the reels swaying back and forth, and then diving on to the game board as a “twisting” Stacked Wild that will shoot other Wilds across the reels. King Tutankhamun looks especially terrifying in this release thanks to his skeleton body and face, glowing green eyes, and snarling jagged teeth – this title is definitely for those who like the darker side life. The soundtrack isn’t the greatest but that doesn’t really matter when you’re getting sucked into this beautiful 5 reel game that’s steeped in detail.

Next up we’re visiting the rolling hills of Ireland to chase pots of gold in a green fairytale setting courtesy of Blueprint Gaming. You will remember this company for its excellent release of Top Cat Slots, which was one of the best games of the year. However, this latest machine called Irish Riches falls a little flat as it brought the gold but forgot the leprechauns! You read that correctly, an Irish themed slot without our little magical friends…or a proper bonus round. Sure the colors are beautiful, there are a few fun reel features like Cascading Symbols, and the soundtrack is a fantastic fiddle-driven foot-stomper, but other than that there’s sadly not a lot here to keep you interested.

Finally, we’re rolling deep into the forest to join up with Robin Hood and his Band of Merry Men in Microgaming’s Robin of Sherwood, which gives us 243 ways to win every spin. In addition to a beautiful background we’re treated to the “Wild Turning Feature” which will transform losing symbols into Wilds with a well-placed arrow. The visuals of Robin Hood shooting his bow and arrow at the side of the screen are amazing and the graphics on the symbols will keep you entertained for hours.

Check out the video below for a sneak peek at what you’ll find in this lovely micro-kingdom.