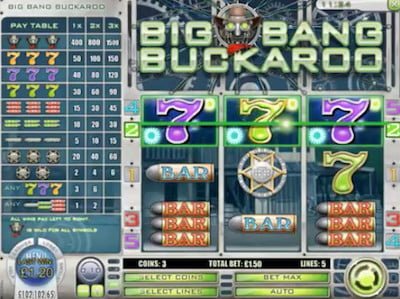 Well it didn’t take long for casino software companies to release some fantastic new slots games in 2018 and today we’re profiling two of the better ones that we’ve come across. Both of them fall into the category of “fantasy space sci-fi” due to their outlandish characters and strange graphics, so get ready for a wild ride. Each is fun in their own way – as long as you have a good imagination and aren’t too attached to this planet.

First we have Big Bang Buckaroo Slots from Rival Gaming, which stars a robot cowboy who’s surrounded by traditional Bars and 7s on the reels, making this one of the few “space cowboy” games we’ve ever seen. Anyone looking for an extremely simple slot will want to try this one out since it’s reels only have a 3×3 grid of symbols surrounded by a minuscule 5 paylines. At a time when software developers are constantly pushing out titles with more and more reels, rows, and paylines, it’s nice to see a game that brings us back to basics.

Our main complaint with this Rival release is that there aren’t any unique bonus features to trigger and the only break you get from the constant spinning is the free spins mode. Also, the biggest prize available is 7,500x your wager. Technically, these points do compliment the “simple theme”, but we did end up getting bored after a short while. Oh – and we hope that Rival is paying royalties to the Disney Corporation because this robot’s voice is exactly the same as the Imperial Probe Droid on Hoth – or maybe they were just “inspired” by it. 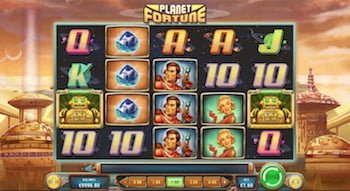 Next on the list is another futuristic title starring robots called Planet Fortune Slots, released two weeks ago by the good time guys over at Play N’ Go. This retro space age delight will have you thinking of the old TV show “Lost in Space” while you rock out to the funky theremin-dominated soundtrack and whacky sound effects. The more winning combinations you hit on the reels the angrier the whacky robot gets as he spits out coins and sparks while his eyes glow an evil red – not to mention that 3 or more of him will trigger the free games mode. This game kept us playing for much longer due to it’s beautiful background, detailed symbols, and awesome graphics.

Anyone wishing to access the “Magnetic Mayhem” of Planet Fortune or the traditional gameplay of Big Bang Buckaroo can head on over to the Videoslots Casino who are currently offering a great sign up bonus that can be used to play either of these titles. Just make sure you don’t get sucked into a black hole on your way!