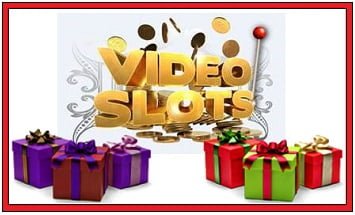 Christmas is less than four weeks away, and already we can’t get enough. What makes being a slot player even more exciting in the month of December, than all of the new slot games? Our answer is the Videoslots’ Christmas promotion, a festive advent calendar has us slot players in mind.

The Videoslots’ Christmas Calendar is a special promotion that started on December 1st, so apologies for being a couple of days behind. Don’t worry though, you’ve still got until December 25th to cash in on this exciting opportunity!

Every day up until Christmas day, Videoslots will be offering various rewards to it’s players. Each day will feature a different slot game, and rewards can be won by completing a certain number of spins on that game. They won’t be announcing the rewards in advance, but some sites are reporting that they could include free spins, Casino Race multipliers, as well as Weekend Boosters.

They offered this promotion last year as well, and great rewards were dolled out to tons of their players. We suspect this December will be even better. We already know that some of the games featured will include Red Tiger Gaming’s Jingle Bells, Play’n GO’s Hugo 2,  Jungle Book, and one that we aren’t really familiar with yet, Diamond Strike. So in addition to giving you a great chance of stuffing your stockings with cash this Christmas, this promo will also give you an opportunity to take a few new titles out for a spin.

If you haven’t already, sign up at Videoslots asap to start taking advantage of this great promo and cash in today!