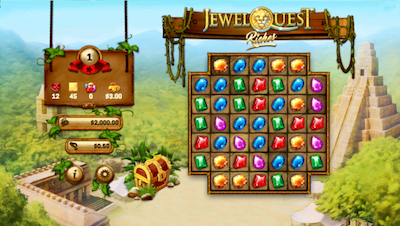 If you’re like a crow and chase after anything shiny, these three new games are going to be right up your alley. Casino software companies are always trying to make their online slots more attractive to players in order to catch their eye and these ones are absolutely glistening. It can be hard to stand out in a long list of titles so here are a few that you might want to check out if you things that glimmer.

First on the menu is Jewel Quest Riches which was released by a company called Old Skool Studios. They are relatively new to the online gambling industry and not much is known about them, however, if this game is any indication of what they’re capable of we’ll be hearing a lot more from them in the future. Jewel Quest Riches Slots appears to be heavily influenced by everyone’s favorite smashing game, Candy Crush, so players of that will definitely want to take a peek at this title. It boasts a beautiful Aztec jungle background and has a decent Return to Player percentage of 95.2%.

Instead of having a traditional 3 rows it sports a 5×5 grid of symbols, all of them being colorful gemstones of different shapes, with winning paylines occurring when you hit 3 matching symbols or more in a row. Matches can occur either vertically or horizontally and winning symbols will be removed to make room for the symbols above to fall down and hopefully create another winning combination. This type of feature is usually referred to as “rolling” or “collapsing” reels and they can certainly boost your bank balance if you get on a roll. (Pun intended.)

Next up is a bountiful game from Big Time Gaming called Bonanza Slots, which will have you spinning for gems in the middle of a diamond mine. This software company is another one of the smaller fries out there who are trying to make a name for themselves alongside the established names in the industry. This game has 117,649 Megaways thanks to its Rolling Reels feature and crazy GOLD bonus round with huge multipliers, (that can sometimes be quite hard to trigger). We found that Bonanza is sometimes more confusing than entertaining so make sure that you’re ready to concentrate on the action. 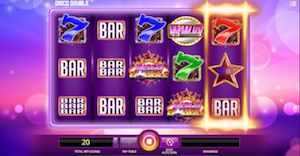 The last shiny new game is from the well-known company, iSoftBet, who made the awesome Beverly Hills 90210 Slots a few years ago. This latest release is called Disco Double and is a simple ’70s reboot of the classic Lucky 7’s machine that everyone knows and loves. Although the soundtrack is more “electro” than “disco” there is a high energy dance track that booms along while you spin. Sadly, the glistening disco ball symbol is the most exciting thing in this title and only traditional slots players will enjoy it’s common sense style.

Anyone living in Canada or the U.K. who want to try out these new releases can head on over to the 888 Casino and play them for free after signing up for a new player account. Don’t forget your sunglasses!