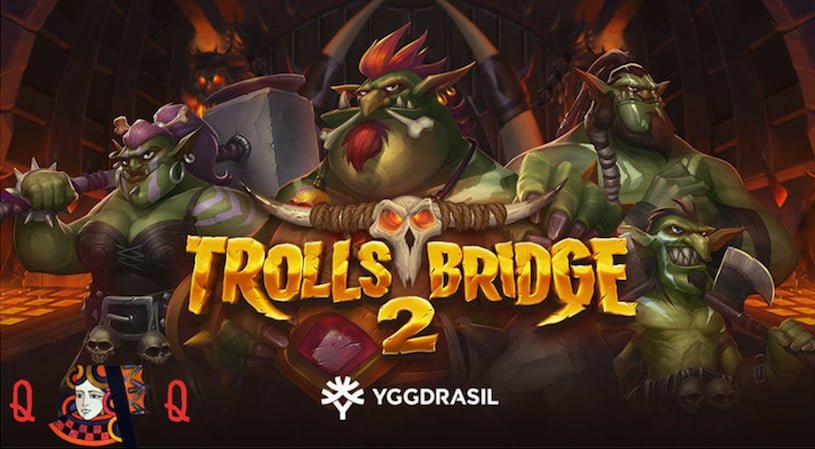 Ever since troll dolls came out over 50 years ago, people have been enamoured with the green freakish creatures, with many considering them to be “cute and misunderstood”. Now thanks to Yggdrasil there is a new breed of troll that’s chiseled and fierce, and will have many video game players thinking of the first time they saw World of Warcraft.

Last week they released a sequel to one of their more popular games and now Trolls Bridge 2 Slots is available at Betsson under an exclusive agreement (for now). They gave the original design a face lift as it was best described as “cartoonish”, with none of the beasts intimidating anyone, however, this time these trolls are coming with an attitude…and bad gas. Yup, some of them will belch right in your face as you’re chasing coins to add onto your balance. How rude!

The soundtrack in the original release was whimsical in nature with hopeful blasts of orchestral instruments that reminded one of a movie score from Danny Elfman, but this new slot game sounds much more foreboding and ominous. The dark music follows you whether you’re at the Pick & Click Gate that leads to the dungeon of free spins, or stirring things up with the Bonus Cauldron to grab gratis games and extra wins.

Troll’s Bridge was remarkably successful for Betsson, and later across our entire network, with tons of features and a theme that really resonated with players, blustered Jonas Strandman, Senior Product Strategist at Yggdrasil, as he raised his foam war hammer high above his head for all to see. As his green face paint slowly dripped onto the spiked shoulder pads of his well-built troll costume he continued his bold statements to the crowd, It came about with a combination of Betsson’s top-notch ideas and Yggdrasil’s tight execution.  The collaboration for Troll’s Bridge 2 was no different – and the result is nothing short of mind-blowing. Indeed it is Jonas and it will be interesting to see if this version is as well-received as the first iteration.

Although this sequel is much darker in nature it can be assumed that Yggdrasil did their market research and are giving the masses what they want. It doesn’t quite fall into the genre of horror slot games but it will certainly creep a few people out.

At the very least, players should be quite thrilled whenever the Colossal Troll smashes through the reels to hand out Wilds and free money, and there’s definitely a few other cool features to see in this machine too.

Those wanting to play Trolls Bridge Slots 2 for real money will have to go to Betsson, but they should really “keep it green” and signup at the Mr Green Casino first to take a few spins at their website. They’re always offering interesting promotions and nice deposit bonuses so we recommend them as a solid option to our Canadian and European readers.

Anyone wanting to check out the original version of Trolls Bridge can do so for free below. Simply click anywhere on the image and the game will load up in your browser or directly on your mobile device. Enjoy the strange cartoon adventure!